Preorder for Trouble with Cats 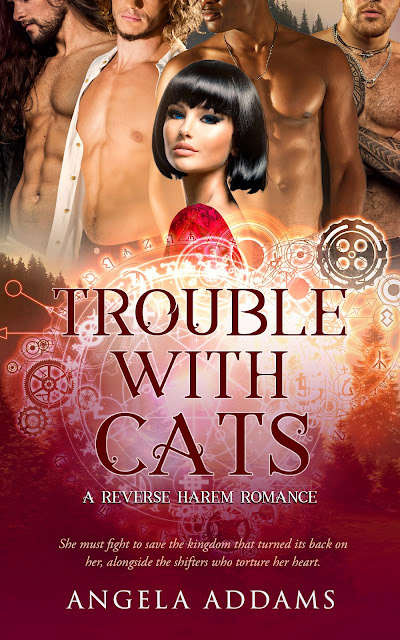 Trouble with Cats, sequel but standalone to Must Love Cats, is on PREORDER! You can reserve your copy here. LINK

She must fight to save the kingdom that turned its back on her alongside the shifters who torture her heart.

She was accused of a crime she didn't commit, betrayed by the shifters she loved with her whole heart and soul and now her life depends on saving the kingdom that turned its back on her.

Crimson might have spent the last year pretending that her banishment from the Court of Shade has been a blessing, giving her time to chill with her devoted familiars, but the reality is it's a punishment—one she doesn't deserve, for a crime she didn't commit. Condemned for the disappearance of the former queens, Crimson and her familiars were cast out of Shade with no investigation and no proof.

With the sudden untimely death of one of the new queens and a handful of familiars, Crimson learns that the Kingdom of Shade is under attack by a witch named Angelica, and her wild cats are causing havoc, destruction and death throughout the land.

Crimson's old loves, Jaggar and Zephyr, insist that the queens are hiding something dark and evil, and that Crimson must rise and become the witch she was meant to be. To do that, she must take their familiar marks, but bonding with them is the last thing she'll ever agree to do. Crimson has a plan of her own to seat herself on the royal dais, but to achieve her goals, she's going to have to set aside her anger, reach deep to find the strength, the forgiveness and even the love she'll need to triumph over evil once and for all.