It's Release Day for Fortune's Fool! 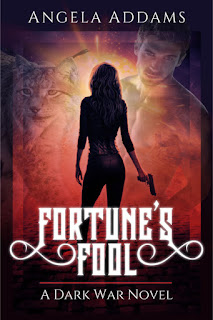 It's here!! Finally!  For the next three months you'll be able to read it for free on Kindle Unlimited or one-click it on Amazon. LINK

Mercenary. Vampire Hunter. All around supernatural herder. That’s me. You find yourself on my capture list and it’s as good as done.

Consider that a personal guarantee from Jet Black.

The current job is to find the witch who was supposed to save the world and end The Dark War. Unfortunately, she’s on Vampire Island, a notorious prison for supernaturals...one I’ve helped fill.

Once there, I’m forced to team up with some other inmates...in particular a certain lynx shifter, Jason, to whom I owe my life. Can’t seem to keep my hands off him either.

So here’s the problem...I’ve got a spell to get me and the witch off the island—a one way ticket for two. It’s a death sentence for Jason if I leave him behind. But it’s a death sentence for all of us it I don’t. I have to choose between my heart and the fate of the world. All because some sketchy little witch couldn’t do the one thing she was born to do.

Saving the world can’t be that hard, can it?

I guess that’s for me to decide.