I revealed my cover for Beast Rising in this month's newsletter but for those of you who haven't yet subscribed (why not?) I'm revealing it here too! 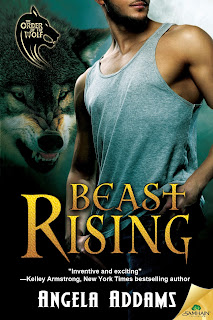 The Huntresses are stepping up their game. So are the forces arrayed against them…

Embracing the Huntresses could mean death to the wolves who love them.

The Order of the Wolf, Book 7

Mayhem is furious. While he and the boys have been rocking it out on stage at a series of concerts in Scotland, Darcy and Aubrey have been sneaking out for, as they so defiantly put it, "training."

Raven is cut to the bone when he discovers what Darcy's been doing behind his back. But simply forbidding the women from hunting isn't the answer. Though it makes him uneasy, he talks Mayhem into joining forces to train alongside their women.

Training is in full swing when they encounter a pair of ancient Huntresses battling each other with powers Darcy and the girls can only dream about. Taking sides turns out to be a mistake when Darcy and Raven are kidnapped, and an evil plan is put into play to use the girls' powers to unleash Lazarus, the king of the beasts.

The only way to defeat him is for the Order, Huntresses, and Wolves to put their mutual mistrust aside and unite. Or the world could be flooded with an unending river of feral beasts.