The Dark War is Coming

My next release is The Dark War and it's due out May 17. This is a project that has been a long time coming and I'm really excited to finally get to share it with you all.

It then spawned another version, this time about a girl who discovers that she's a witch with extraordinary tracking powers and she's being hunted by a ruthless vampire master. That project, sadly, will also live forever in the abyss of my computer hard drive.

And lastly came The Dark War, which takes the idea of  witch with innately powerful tracking powers who uses them to hunt her own kind. She's a bit on the dark side and definitely has some issues, but that's the kind of main character who really speaks to me. This novel was a rewrite of the two previous novels, and really came from my good friend Michelle von E's suggestion to "show me how the war started" and so, for her, I did.

It's a little over a month still before The Dark War comes out but I'm pumped for you all to read it. 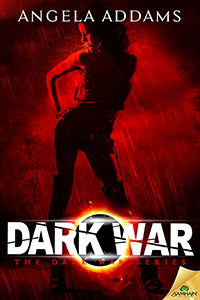 As the darkness rises, magic is their only defense—if it doesn’t end the world.
The Dark War, Book 1
Witch. Hunter. Traitor. Kali Richards’s solitary life’s work is to hunt the evildoers of her own kind and bring them to justice. She’s poised to catch her latest bounty when she realizes her quarry is a witch-vampire hybrid with a taste for blood—Kali’s blood.
She’s lost quite a lot of it when Wyatt, the ex who still owns the pieces of her shattered heart, comes to her rescue. Eight years apart hasn’t cooled her anger over their breakup. Neither has it cooled the desire still steaming between them.
As Wyatt heals her wounds, he brings disturbing news: Kali’s mother has awakened from a years-long coma with a prophecy on her lips. A Dark War is coming that will pit supernatural against human. Kali is the key to stopping it.
Except Kali isn’t what you’d call adept at spellcasting. Like it or not, she needs a lot of help. From Wyatt, and from the organization that she turned her back on once before—the Witch Hunter’s Union. Even with an army at her back, she’s in for one hell of a ride…
Warning: May contain a stubborn little kick-ass witch, a wickedly sexy ex-boyfriend and a whole lot of hybrid trouble