It's Valiant Heart's official release day today! Yippy! I'm really proud of this book because I've finally brought my Amazon women to life. If you like strong, kick-ass heroines, this is the book for you!

I'm over at Paranormal Haven today talking about non-traditional romance and running a contest! Check it out! LINK

To my newsletter folks, I've randomly drawn the signed paperback and book cover magnet set winners and they are: Angel Baby, Tiana S and Angel! Congratulations! (Check your email for information!) 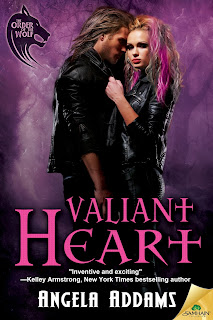 When the choice is love or loyalty, no matter what she chooses the heart will bleed.

The Order of the Wolf, Book 6

Slay the beasts. Save the day. Such is Ariana’s role in her first mission for the Queen. She has no reason to think the rest will be any different…until, in the heat of battle, she uses her powers to heal an injured Order Huntress.
Her gift doesn’t go unnoticed. Lance, her very own Hunter, zeroes in, and a different battle is on. Lance is hot and very attentive, but this Amazon is determined to stay independent.

Lance has prepared his whole life to battle alongside his mate. Now that he’s found her, nothing and no one else matters. He’s not letting her go.
For the Queen’s second mission—bring the Oracle into the tribe—Ariana risks taking Lance’s bond to get more power. She never expected her body to crave more pleasure, her heart to lower its defenses.

As the battle rages on between Huntresses and beasts, there’s a foul plan in play that will force Ariana to decide where her loyalty lies. The cost of her choice could be a life.


Contains a squirm-worthy love triangle, plus some scenes of debatable consent between a take-no-crap Huntress and a super-hot playboy with a come-hither smile and a come-multiple-times tongue.

Thanks for all the support for my Order series!