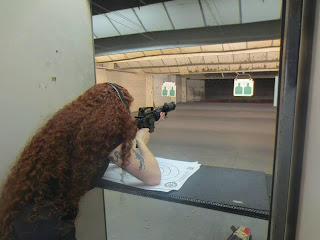 Okay, so nothing that dramatic happened at my first ever gunfight…those zombie targets didn’t know what hit ‘em! A couple of weeks ago, hubs and I went to a local shooting range that allowed public access. It was a very enlightening experience and I thought I’d pass along some little pieces of gold that every writer should know (especially if you’re writing shooting scenes).

1)   It’s louder than you think: Seriously, I jumped a few times when the guns around me started going off. Even with earphones on, it was pretty loud. I've written gun fights where no one even flinched at the sound of a gun going off...there would be flinching at the very least!

2)   Loading a 9mm clip isn’t as easy as it looks (it’s actually quite tedious and not really glamorous at all). I was supposed to be loading ten bullets into the clip and got to nine before I couldn’t force another one in. Apparently there are devices that can make loading easier and faster, but I wanted to see what it felt like to do it by hand. Definitely not something you could do if your hands were shaking and your eyes scanning for approaching targets.

3)   If you really think you’d be able to hit a moving target your first time ever shooting a gun (with zombies or crazed axe murders coming at you fast) then you’re delusional and so is your main character. With the noise, adrenaline, fear all pumping through you, there is just no way you’d be able to pick up a gun for the first time, aim and hit your target…a moving one especially. And that’s not even talking about distance!

I took my time shooting. Lined up each shot, made sure the gun was steady and did pretty good overall. If I had to shoot quickly, like my life depended on it? Yeah, I’d be zombie meat in no time.

4)   Guns smell bad when fired, some worse than others. They give off this acrid sulfuric kinda smell that sticks in your nose. I’m sure you’d get used to it, and outdoors it wouldn’t be so bad, but at the shooting range it was pretty awful. Something to keep in mind when you’re writing shooting scenes that take place in doors.

5)   Recoil really fucks with your aim. Seriously. I’d heard it would but there’s nothing like feeling it in your hand, snapping your wrist, or into your shoulder (depending on the gun.) If you’re not prepared, or not strong enough, it can hurt and it can majorly mess with where that bullet is going. Also, if you’re not in shape or used to it, your arm gets tired after a while. My arm was actually numb after two hours of shooting.

6)   It’s a hell of a lot of fun! I tried four different guns but I liked the shotgun and revolver the best. I’d love to go back and try some different ones. Entertainment wrapped up in a scary, death in your hands kinda way. 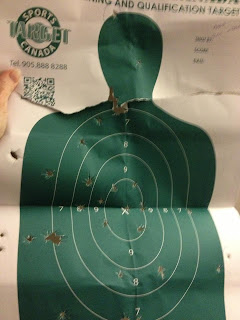 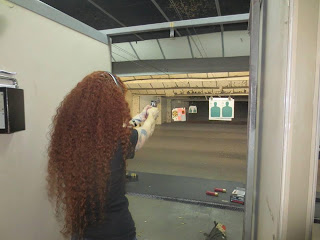 I've got some news, BIG NEWS!

I don't know if many of you have a bucket list (a list of things you want to do before you die), but I do. It's my writer bucket list and on it are only a handful of things. Number one was to get an agent. I did that, twice over, and due to diverging paths, am now agentless - a thoroughly thought-out decision made by moi. This is not a bad thing, it just is what it is. I was tethered and now I am not, and that's not a bad thing either.

Another thing on my bucket list is to get published by one of the BIG epubs. I'm very excited to announce that I have signed a contract with one of those publishers. My sexy, rock-star werewolf novella entitled Cursed will be published by Samhain Publishing in May 2014 (tentatively) and I am super freakin stoked about that! Seriously huge honor to be among the authors on their roster. I am also excited to be working with Holly Atkinson, my editor at Samhain, who has been so complimentary, helpful and welcoming!