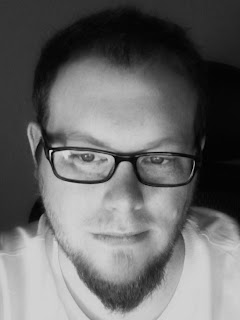 The Good, The Bad, The Ugly: Give me a quick run down of what’s happening in your writing world these days.

Well, first off, thanks for hosting my today. You rock. I’m currently being all zazzy about my debut novel Artificial Evil: Book 1 of The Techxorcist, a cyberpunk/technothriller that mixes Blade Runner, Mad Max, and The Exorcist. Beyond that I’ve just completed a gothic novella ‘Heart for the Ravens’ that will be published by Fox Spirit Books. I’ll soon be heading back into more of The Techxorcist with the follow up: Assembly Code.

What kind of writer are you? Do you plot your stories out? Do you have a particular routine? What does your writing “day” look like?

No single day looks the same. I do like the idea of routine, but it doesn’t always work out like that. I have a schedule I like to stick to, but with most best-laid plans, it never quite runs the way you’d want it to so I just try and write when and where I can.

I’m a plotter; I hate having to go into a project not knowing where I’m going. I write quite lengthy outlines, detailing each scene, the character’s motivations, transition points, reversals, and the whole fail/success cycle.

Once I have that structure in place I’m free to get creative and decide how to get from one scene to the other. By doing it like this I find it gives me direction and each time I sit down to write I can get straight to it; there’s no worrying about whether it’s working or not. Some find it restrictive, but placing restrictions (an outline) on one’s self can often be very creative.

How long have you been writing for?

Seriously for about 10 years, but I’ve been writing stories since I was about 8 or 9.

What’s your opinion on agents? Traditional Publishing? Self publishing? Etc. Where do you think we’re going in this crazy publishing world?

Honestly? I have no real idea. The whole thing is a mess at the moment and no one has any clue as to what they’re doing or where it’s going. I personally believe in a blended approach in that I’m happy to self-publish work, submit to small/indie press and also follow the traditional model, but the main thing is authors have more power now. We aren’t slaves to bad contracts or dodgy agents, we have various avenues to explore and that’s pretty great.

What is the best way to sell books?  To get your name out there?

What are your goals for the future? Where do you want your writing to take you?

My goals for the future are to conclude The Techxorcist series, and a duology that I’m currently writing. I’m always looking to improve my craft, so I’d like my writing to take me from one book to another improving each time and hopefully building a fan base that will allow me to continue writing full-time.

If you could get inside the head of one writer (living or dead) for an hour, who would it be and why?

Ray Bradbury. The man was pure magic. A bonafide literary genius. And he was such a lovely guy. He was the most passionate of all writers about his work and found joy in almost everything he did. I’d love to see how he saw the world just for a while.

Thanks for hosting me, Ang. It’s gratefully appreciated. 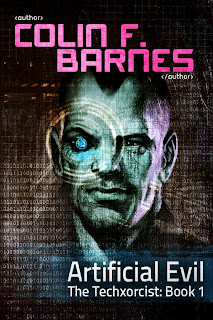 Artificial Evil: Book 1 of The Techxorcist is available as a paperback and ebook from:

Three hackers. A deadly plot. One chance to save humanity.

2153. Post-cataclysm. The last city exists beneath a dome where the mysterious benefactors 'The Family' tightly control the population with a death lottery and a semi-autonomous network.

All is well until the day family man Gerry Cardle, head of the death lottery, inexplicably finds himself the no.1 target of a malicious Artificial Intelligence. Gerry's numbers are up, and he has just 7 days to save himself,  find the source of the AI, and keep the last stronghold of humanity safe.

Gerry finds help in the shadows of the city from two rogue hackers: Petal - a teenage girl with a penchant for violence, hacking systems and general anarchy, and: Gabriel - a burnt-out programmer-turned-priest with highly augmented cybernetics.

With his new team, Gerry discovers there is more beyond the dome than The Family had let on, and his journey to find the source of the AI leads him through a world of violence, danger, and startling revelations.

Everything is not as it seems.
Gerry is not who he thinks he is.
Evil can be coded…. can Gerry and his friends stop it before it destroys humanity?

Artificial Evil is book 1 of 3 of The Techxorcist series. The larger-than-life offspring of Blade Runner, Mad Max, and The Exorcist.

Quotes:
"Artificial Evil: Book 1 of The Techxorcist sees the revival of everything we used to love about cyber punk, repackaged with new twists in this tech thriller. This is a brilliant tale that combines fantastic characters, great tech and a little bit of good old fashioned possession" - Adele Wearing, Un:Bound

"The Techxorcist project piqued my interest for a couple of reasons. First, it is the brainchild of Colin F. Barnes whose work has, to date, always lived up to expectation. The second reason is the title; not only is it fun to say, but it also sets the tone for a grim cross-genre design.
Having had the pleasure of reading Articificial Evil: The Techxorcist Book 1, I can honestly say I was not disappointed. The quality of the writing, the originality of the ideas – they blend together to show Barnes’ work at his best. The passion behind the project comes through every description and in every brilliant character – once you meet Petal, you’ll understand.
Artificial Evil reads as multiple stories at the same time. On the surface a fantastic plot-arc following a post-apocalyptic virtual battle against an evil AI, the brilliance is in the layers of interpretation going on behind the scenes. There are elements of a dozen classic tales intricately woven into the characters, the concept, and the dialogue, and the combination creates a story that is so rich in meaning and allusion it’s impossible not to connect with this seemingly distant and unrecognizable world.
A story that opens the mind to possibilities, crazy ideas that somehow seem plausible, Texchorcist is an exploration of how much we’re willing to give up to be free, and how far we’re willing to go to keep that freedom." - Krista Walsh, Raven's Quill.
Bio

Colin F. Barnes is a writer of dark and daring fiction. He takes his influence from everyday life, and the weird happenings that go on in the shadowy locales of Essex in the UK.

Growing up, Colin was always obsessed with story and often wrote short stories based on various dubious 80s and 90s TV shows. Despite taking a detour in school into the arts and graphic design, he always maintained his love of fiction and general geekery. Now, as a slightly weathered adult, Colin draws on his experiences to blend genres and create edgy, but entertaining stories.

He is currently working on a Cyberpunk/Techno thriller serial 'The Techxorcist.' which combines elements of Sci-Fi, Thriller, and Horror.

Like many writers, he has an insatiable appetite for reading, with his favourite authors being: Stephen King, William Gibson, Ray Bradbury, James Herbert, Albert Camus,  H.P Lovecraft, Clark Ashton Smith,  and a vast array of unknown authors who he has had the privilege of beta reading for.