I'd like to introduce my friend, Steve McHugh...a fellow writer who I've come to know through my writing group, the OWG (Rebels Rule! Woo!)

Steve has a new book out called Crimes Against Magic and he's here today to talk a little bit about writing those dreaded sex scenes. Enjoy :-)


Although a massive generalisation, it’s very quickly become apparent to me that women write better sex scenes then men. I can think of, at a push, three male writers who write excellent sex scenes in their books. I can think of at least a dozen women, right off the top of my head who do the same.

Now, of course there are women who can’t write sex scenes either, but even so, the odds are firmly in the female court.

So, it was with a little trepidation that it became apparent that my first book, Crimes Against Magic, was going to have sex in it. This was a problem for one reason. My sex scenes were dreadful. They read a little bit like an educational sex talk given by a teacher for whom the word ‘sex’ should never leave their mouth. They were dry, dull and quite frankly about as sexy as wet cardboard.

So I needed to re-work it again. And this time I found some good advice. Apparently, I’m pretty good at writing action scenes. So, why not try writing a sex scene in the same way? Everyone writes action scenes in their own way, but I tend to map out where everyone is and what they’re doing, or going to be doing.

Applying it to a sex scene was actually straight forward. Instead of several people all in the same place I only had to deal with two (although, your mileage may vary). So, I wrote it as if it were an action scene, or a fight. Once I had the backbone for it, I found it much easier to go through it and make it ‘sexier’, but having that base was necessary for me.

Since that first time, I’ve found it much easier to switch into ‘sex scene mode’ for writing and can usually manage it without the need for the clinical part first. I’m never going to write the greatest sex scenes of all time, but I hope I’m no longer in the same bracket as some of the truly terrible ones.


Steve McHugh is the author of Crimes Against Magic. An urban fantasy set in modern day London with Historical flashbacks to early fifteenth century France. 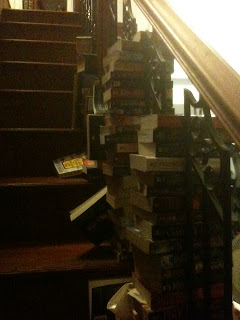 So, here you are, folks...this is the staircase leading up to my "writing loft" (that I never use for writing). Notice the pile of books I have there...it's dangerous going, let me tell you. I've tripped on numerous occasions...and it's nothing compared to the hundreds of books of have in the loft. My husband calls these the ugly books...you see, he collects leather bound books --la dee da (I love you, hehehe ;-) and claims that mine are not fit for public viewing. He also jokes (but not really) that the weight of all of my books in the loft will one day bring the whole house down. We live in a century home (1895ish) so this is not a joke I like...especially with all of the creaking that happens at night when the house settles. Despite the fact that he bought me an ereader last year, I still gravitate toward the "ugly" books and worse, even though I will loan them out (some but not all) I insist on getting them back. I loath giving up my books permanently. I have mentally catalogued any books that I've lost (have not been returned) and will NOT loan to those book thieves again.

I, Angela Addams, am a book hoarder. I am.

I love the smell of books...yes, I am the kind of person who cracks a book open just to inhale the book smell. I love the feel of books...I have been caught caressing my books. I love the look of them...even my husband's clunky leather bound ones that get the honoured spots on the "nice" shelves in his office. I love them. Book stores excite me, embarrassingly so.

This is not an I hate e-books rant...I'm an e-book author, for goodness sake...and I love my e-reader as well...(I can hoard loads more books on my Kobo...LOADS). But I thought, in the face of this e-book revolution, that I'd give a shout out to the lowly little paperback (hardcover, trade, whatever) and confess my undying love for all of the books I house in my attic.