Some of you may already know this, but about a month or so ago, my writer friend, the talented Seleste deLaney gave a few of us a heads up about a series she had pitched to Evernight Publishing revolving around the adventures/misadventures of Cupid. Her novella, GunShy released a few weeks ago.

So after giving it some thoughts, I wrote up a story idea that had been rolling around in my head for some time (like years actually) about a rock star and his true love...only to discover that my story's premise was almost identical to the one Seleste had written.
(Uncanny coincidence).

I really wanted to be apart of this series, however, so I quickly went back to the idea well and pulled out one that I'd just recently been mulling over. After a few weeks of writing, editing, rewriting...I present you with: Going the Distance...to be released sometime in January!!

And on top of that I just got my cover art. Check out the awesome work of Dara England. 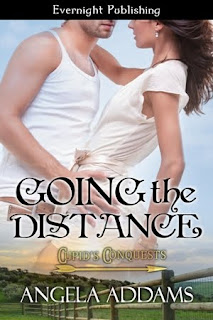