I have cover art! 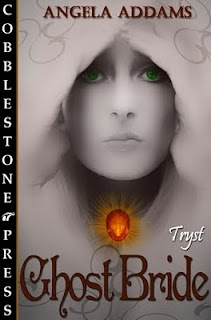 No release date yet for Ghost Bride but I do have some amazing cover art...check it out!

Not only is she dead, trapped in her house as a bored and useless ghost, but she’s dead and now supposedly married to a mysterious stranger name Cole. Dasha is faced with a dilemma: give into her pulsing desires for her new husband who is hotter than any man she’s ever seen before or play it safe like she always did when she was alive and reject the only passion she has ever felt. How much faith is she willing to put into a bond that she didn’t ask for, in a marriage that she didn’t even agree too?
Posted by Angela Addams 5 comments:

Product Placement: The casual use or display of products in movie and t.v. shows that act as a kind of subliminal advertising.

We all probably expect product placement in movies and t.v. shows but how about fiction?

I’ve been reading a series lately (well, devouring is a more accurate description) that uses product placement to such an extent that I have to wonder if the author is being paid for endorsing the products littering the pages of the novels. Now, I do love the series in question but the amount of product name dropping is bordering on ludicrous. It’s jarring, pulls me from the story time and time again (and that’s a lot because it usually happens a few times per page), and I don’t really get the point. It won’t stop me from reading more and more of the series but it has left me wondering how much is too much?

During the very first rewrite I did for my agent I was warned against dropping product names. I used the name of a well known discount chain of stores and my agent felt that this might be entering dangerous territory for a variety of reasons...so I removed it. Now, when I’m writing, I am very diligent about keeping those references out.

I’m not sure fiction is the right place to drop product names...unless it’s used to establish character or setting in some way, but even so, couldn’t that be done in a generic way somehow?

What do you all think? Should writers use product names in their manuscripts or should they avoid it? Have you noticed it happening in other novels you’re reading or do you just gloss over it and ignore?
Posted by Angela Addams 10 comments:

The Wonderful World of Agent Revisions

I was trolling around the other day and stumbled across this post on Rachelle Gardner’s blog about doing revisions for agents and I found myself riveted to what she was saying. Not only did I think it was informative but I found it reassuring as well. All of the things she says in this post my agent has said to me over the past six months.

As most of you know I’ve been working on rewriting my novel for my agent for a while now. We’re up to rewrite #3 at the moment and although I truly hope she likes this version (I believe it is the best one yet), I won’t be surprised if she comes back with more suggestions, and I’m okay with that.

It’s extremely hard to look at revision notes from an outside perspective and not only trust the direction you are being steered in but also embrace the suggested changes as they are. Being a rebel by nature, I bucked and revolted against many of the changes my agent wanted, so sure that I was right because it was my story. But in the end, every time I’ve done a rewrite for her, no matter how painful it has been, I’ve come out with a stronger and better novel, which is why if she asks for another rewrite I’m okay with it. I trust her; she knows what she’s doing and she believes in me.

And that’s something that is one of the most difficult things to wrap your head around when facing revisions notes: Why did she take me on in the first place if she hates the way I’ve written the novel?

Seeing all of those suggested changes and big red X’s drawn through my ms is sometimes hard to handle at first. It can be very deflating and exhausting to contemplate. It’s also a blast to a writer’s self-confidence but as Rachelle Gardner points out it’s all about potential. My agent has said the same thing to me several times over the past few months. She saw something in my writing that she thinks is workable and she believes that I am a good writer – it’s the ms that needs more work. Although it’s difficult to believe in yourself when you’re taking your beloved ms and completely changing it to something new, I realize that if she didn’t believe in me she wouldn’t be investing the time. For all of the rewrites I’ve done, she has had to reread my ms over and over again. I can’t imagine how tedious that can be – there are very few novels that I would read four times.

I realize now, through the emotional ups and downs of revising (and trust me, there are a lot of downs), that I can do whatever difficult task my agent has set forth for me. It might hurt at first; my instinct might be to revolt against the suggestions (you can’t get away from your personality) but in the end I’ll do it and it will be better. I truly value my agent’s suggestions, feedback and insight. I trust her implicitly and I know that she’s taking me in a direction I want to go.

We’re getting closer to the end – I’m not sure if we’re there yet, but I think I can see the finish line.
Posted by Angela Addams 9 comments: